Review Of Datasets And Their Disability Questions: Method And Results

This report starts with a systematic analysis of the disability questions in national censuses and household surveys globally.  Survey and census questionnaires from 2009 to 2018 were retrieved from the online International Household Survey Network Microdata catalog, the World Bank Microdata Library catalog, the International Labor Organization survey catalog, the repository of census questionnaires maintained by the United Nations Statistics Division, and the websites of individual National Statistical Offices. The resulting pool of censuses and surveys included 828 datasets and 1,486 dataset-years from 180 countries and territories (countries thereafter). The review covered countries in East Asia and the Pacific (30), in Europe and Central Asia (46), Latin America and the Caribbean (29), Middle East and North Africa (18), North America (2), South Asia (8) and Sub-Saharan Africa (47).

Disability can be defined in a variety of ways, which gets reflected through various questions in surveys (Appendix 3 Method briefs #1 and #2). Each dataset questionnaire was searched for any disability question. If disability questions were found, they were categorized as follows: (i) questions of the Washington Group (WG) Short Set (WGSS) covering six domains (seeing, hearing, walking, cognition, self-care, communication); (ii) functional difficulty questions (four to six of the domains in (i) but not the same wording as in the WGSS questions and/or answers); (iii) activity of daily living (ADL) questions; (iv) broad activity limitation question (e.g. “are you limited in the kind of, or amount of, work you do due to a health condition or impairment?”); (v) general disability question (e.g. “do you have a disability?”); (vi) other disability questions (e.g. “do you receive disability benefits?”). Only questions as per (i) and (ii) are considered to be internationally comparable questions on disability as recommended by the United Nations Principles and Recommendations for Population and Housing Censuses (2017, p. 207). Questions need to cover at least the four essential domains of functional difficulties (seeing, hearing, walking, cognition).

The rest of this section describes and discusses the main results out of this dataset review. The entire set of results is available in the Dataset Review Results Tables.

Table 3.1: Results of the Review of Datasets

Source: Own calculations based on dataset review described in the text.

Figure 3.1: Countries With And Without Functional Difficulty Questions In National Censuses Or Surveys (2009-2018) 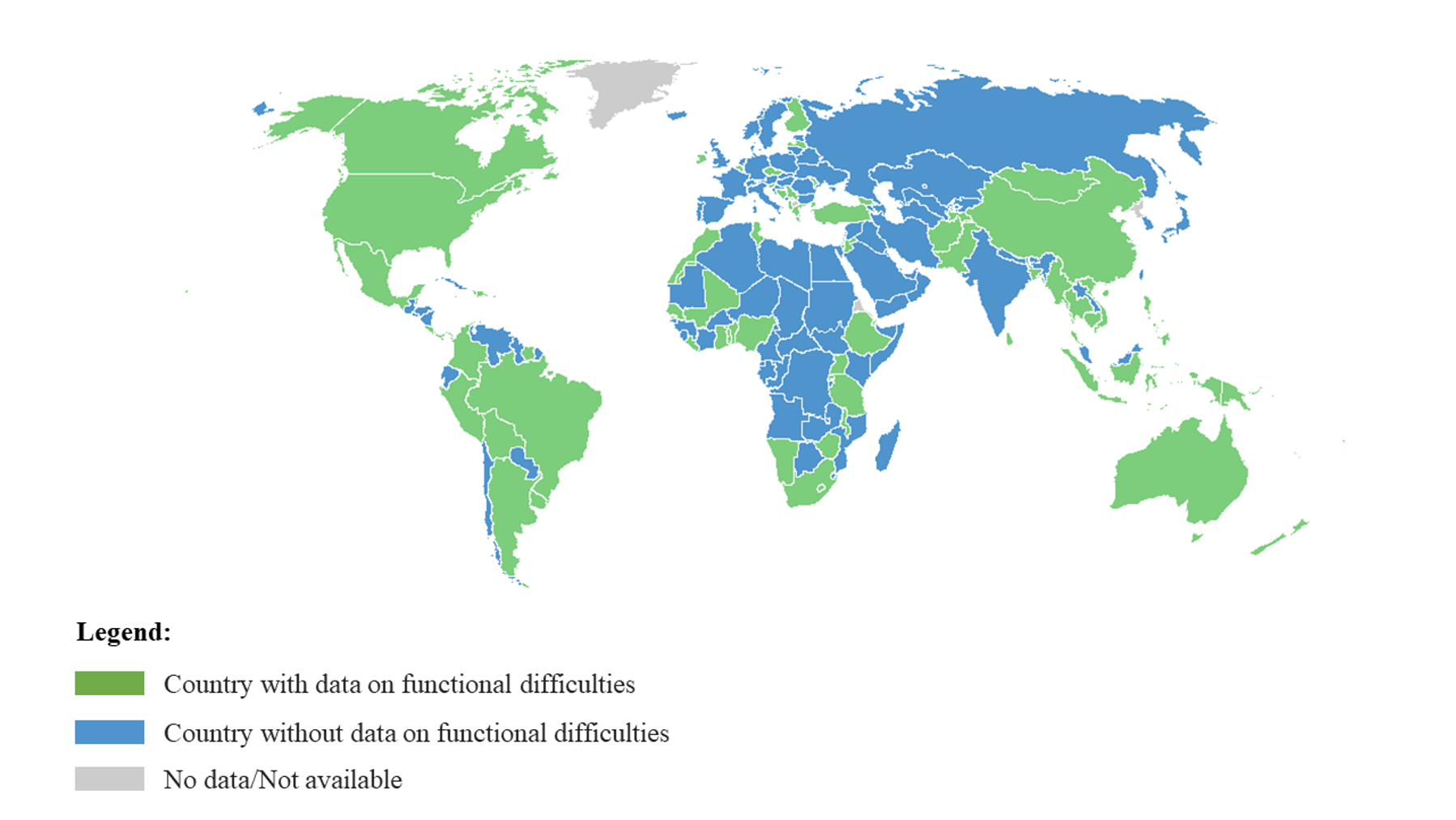 Source: Own research and review of questionnaire

In addition, this review also found a consistent pattern of asking only the most basic question: “do you have a disability?”[2]. This is a lost opportunity as such a question cannot be meaningfully used in international research as it may mean different things to different respondents and responses may not be reliable due to stigma around disability[3].

This analysis of survey and census questionnaires has several important limitations. It covers surveys and censuses that had questionnaires available in English, French, Portuguese, or Spanish. It does not cover surveys with a focus on children (e.g. Multiple Indicator Cluster Survey). The list of datasets under consideration is not exhaustive in that some were not covered as their questionnaires were not available in a language that researchers understood[4]. It is also possible that some datasets were missed.

Nonetheless, this dataset review is valuable in that it shows regions of the world where internationally comparable disability data is missing and it supports calls for further disability data collection globally. In many countries and datasets, persons with disabilities are invisible.  Much work remains to be done to implement Article 31 of the CRPD for States Parties “to collect appropriate information, including statistical and research data, to enable them to formulate and implement policies to give effect to the present Convention”.

[1] Our review does not reflect the recent adoption of the WGSS (2019, 2020). As per a private communication with the WG secretariat, some countries reported to the WG secretariat to have used the WGSS in data collection and yet are not found to have the WGSS in the datasets reviewed in this report.

[4] This limitation due to language may affect countries and regions of the world differently.